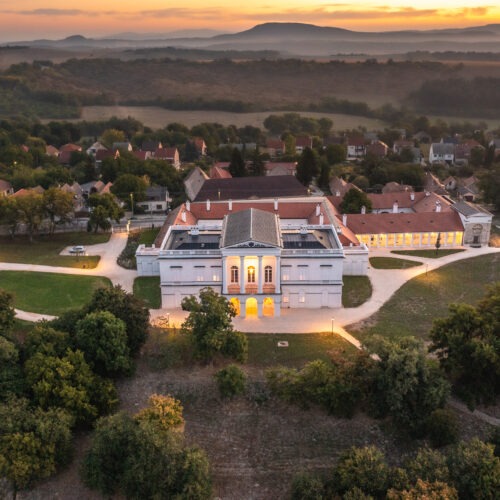 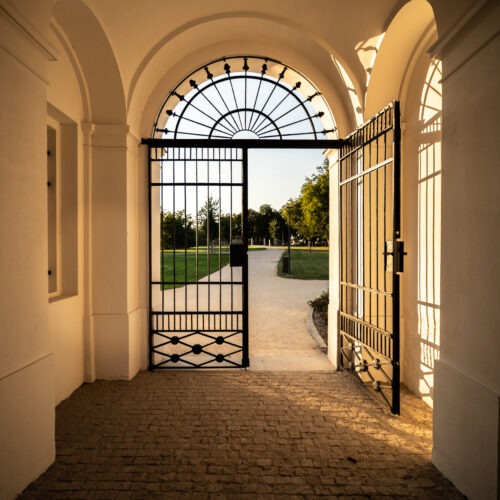 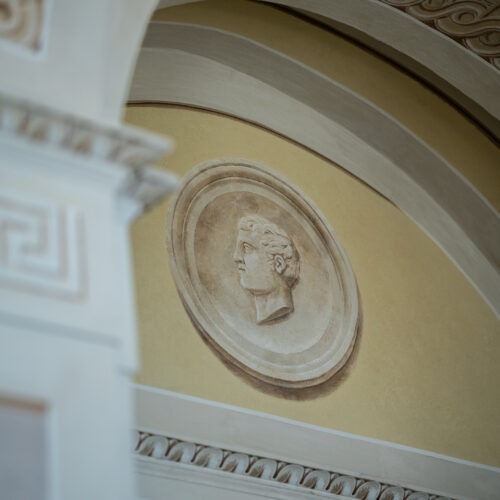 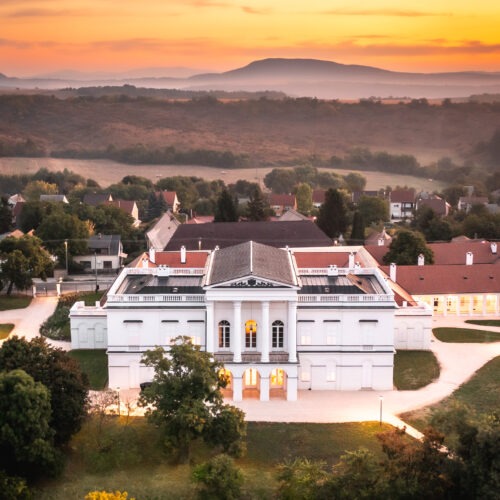 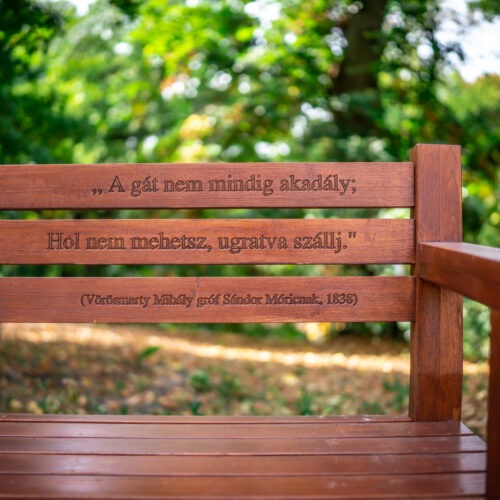 The Sándor-Metternich Mansion in Bajna currently has the appearance of a classicist structure, but study has revealed that it has undergone multiple reconstructions. At the end of the 15th century and the beginning of the 16th century, a noble mansion existed on the site of today’s building.

One of Hungary’s most beautiful classicist mansion complexes, the Mansion of the Devil’s Horseman, i.e. the Sándor–Metternich Mansion, is located in Komárom-Esztergom County, at the highest point of the settlement of Bajna.

Architect József Hild drew up the plans for the hunting lodge built on the Bajna estate – in the eastern part of the Gerecse region – around 1720, as part of a 19th-century reconstruction and enlargement, which included a one-story, classicist-style building with a rectangular floor plan for the main wing and a ground floor plan for the side wings. It is often called the Mansion of the Devil’s Horseman, with reference to Count Móric Sándor. In England, people stated, “He is not human, he is a devil.” His hair-raising equestrian achievements reverberated throughout Budapest and Vienna. In the British Isles, he established several world records. He even leaped from his own mansion’s balcony and, according to legend, frequently rode within the mansion’s walls.

Owing to the developments, the main building, the forecourt and the gardens of the mansion have become a high-quality event venue. Outdoor venues can be covered with a tent on request, thus becoming suitable for larger events, performances, corporate events, chamber music concerts, family events, wedding ceremonies, or exclusive events even of international significance.  The chapel is an excellent choice for modest baptisms and weddings. Museum pedagogical sessions, as well as children’s birthday and name-day celebrations can be organised at the mansion café.

The beautified exterior and interior of the mansion having undergone period restoration, may also be the perfect venue for filming and thematic photography.

The ticket desk closes 1 hour before the end of the prevailing opening hours.

Bajna is 46 kilometres northwest of Budapest, by the main road connecting Esztergom with Tatabánya. (Tatabánya is 25 km away, while Esztergom is 21 km away.)

THE MANSION OF THE DEVIL’S HORSEMAN

For decades, the mansion in the heart of Bajna had been waiting for its rebirth in an unworthy state. We may now visit several wonderfully renovated palaces and mansions as a result of the work carried out in the framework of the National Palace and National Castle Programme, but the transformation of this edifice in Bajna is extraordinary: the former residence of the Devil’s Horseman had to be re-erected virtually from the ruins. The Bajna Mansion is awaiting its visitors with an appearance worthy of the magnificent achievement of Hungarian classicist architecture, finally revived internally and externally in 2021, after decades of neglect and then an award-winning renovation.

THE MANSION’S PAST IS BROUGHT TO LIFE ON THE GROUND FLOOR, WHICH INCLUDES NOT ONLY THE HISTORY OF CONSTRUCTION BUT ALSO THE PERIOD OF DESTRUCTION.

The most notable attractions are the Baroque murals discovered during the renovation of the mansion, as well as the chasubles – significant pieces of applied art -, which were gifted to the home chapel and the parish of Bajna by Empress Maria Theresa and the mistresses of the mansion. We portray the history of the building as well as the important artists engaged in its creation through archive images, plans, paintings, and interviews. Aside from the heyday of the mansion, the age of devastation, the post-World War II period, and over 30 years of archaeological and art historical research and results relating to the mansion are all presented (in photographs, film excerpts and artefacts). The history of the mansion is also portrayed in animated films in a clear and enjoyable manner.

VISITORS CAN LEARN MORE ABOUT MÓRIC SÁNDOR AND HIS DAUGHTER, PAULINE METTERNICH-SÁNDOR, IN THE EXHIBITION ON THE FIRST FLOOR OF THE MANSION.

The permanent exhibition titled “The Mansion of the Devil’s Horseman”, situated in the former aristocratic residence, features two remarkable people who, without a doubt, deserve to be in the spotlight today, just as they did in 19th-century Europe. The mansion’s most renowned owner was Móric Sándor, the count who was known for his hair-raising equestrian prowess. He turned the previous Baroque structure into a classicist masterpiece that can still be seen today. He had two masters on hand: Joseph Hild, who designed the exterior of the building, and Alessandro Sanquirico, a set designer at the Scala in Milan, who designed the classicist ceremonial halls. The former has left his thumbprints – visible from afar – all over the edifice, situated in a picturesque setting, while the work of the Italian artist can be admired in the restored and rearranged Raffaello and Etruscan halls.

The first room of the northern tract presents Móric Sándor, a sensitive, artist-loving private man who excelled in playing the zither and wrote shorter pieces of music that are presented to the general public for the first time in this hall. The count is depicted as a daring rider in the following room. Here, in addition to contemporary illustrations of horse jumping and intrepid equestrian feats, the visitor can experience first-hand the sports performance for which Móric Sándor’s equestrian expertise became famous, by wearing a VR headset at a simulation station. The former master of the house is depicted in the following room as the Anglophile count, who enjoyed racing horses and hunting, and the furnishings of his mansion mirrored his taste.

Pauline Metternich-Sándor, the Count’s daughter and heir, is the second central figure of the exhibition. The princess was a true fashion dictator of her time, with a dynamic and eclectic social life. The first hall of the women’s wing recalls Pauline’s childhood in Dresden and Paris. The visitor can get a glimpse of none other than Napoleon III’s court in this room, as Pauline became a confidante of the emperor’s wife, Eugénie. This chamber reveals the Metternich couple’s (Richard von Metternich and Pauline von Metternich) large Parisian residence, and visitors may enjoy a slide show of pictures of the era and Pauline’s Parisian years in the comfort of a cinema. The visitor can get a sense of the French bond with Wagner through the account of the Parisian Tannhäuser premiere. The reproduced Worth clothes models can be looked at in the corner salon, evoking Pauline’s strong relationship with the most beautiful Parisian clothing store of the time. Contemporary fashion magazines enable the visitor to flick through the elite fashion life of the second half of the 19th century. The Viennese years are presented in the next room. The famous-infamous women’s duel, in which, according to legend, Pauline fought Countess Kielmansegg – topless – is the hall’s major attraction.

This section of the exhibition summarises the life of Pauline Metternich-Sándor as a modern, “multidimensional” woman with a complex personality and provides an overall impression to the visitor.

The most ornate Roman-era Pannonian coach-decoration ensemble was discovered on the Somodorpuszta estate, near Bajna, on the lands of Pauline Metternich-Sándor, daughter of the most famous Hungarian coachman. A complete virtual reproduction of the carriage that the exquisite bronze fixtures used to decorate, has also been made for the exhibition.

Any cookies that may not be particularly necessary for the website to function and is used specifically to collect user personal data via analytics, ads, other embedded contents are termed as non-necessary cookies. It is mandatory to procure user consent prior to running these cookies on your website.